Marks, all of them, and the Sixth World is full of them. Yeah, blasting your way into a well-guarded facility is fun, but talking your way in, smooth and subtle, might be more rewarding. Almost every kind of shadowrun involves at least a little con artistry, and some of them are full-on long cons. That means you need to sharpen your con game. With tips, plot updates, spells, gear, and more to improve characters’ con abilities, Cutting Aces gives players the swagger and skills they need to swindle the world. It also includes information on one of the Sixth World’s hottest spots for running a con—Istanbul, City of the World’s Desire.

Cuttings Aces is for use with Shadowrun, Fifth Edition, and it also contains plot information, story ideas, and characters that can be used with Shadowrun: Anarchy with slight adjustments of character stats. 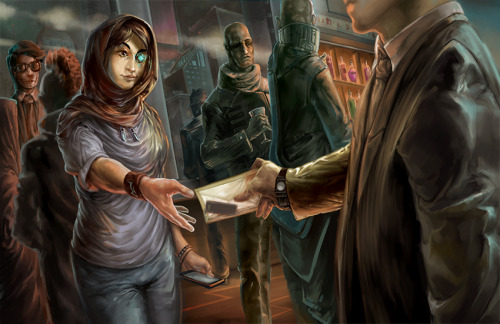 Peter Scholtz
Hi guys is crossfire a dead product? I am asking just because it is from my perspective one of the best games i played.

Catalyst Game Labs
Not at all! We're working on both a new print run of the base game and a new expansion to follow on the heels of the High Caliber Ops expansion that came out last summer. Glad you're enjoying the game! jmh

Catalyst Game Labs
Awesome! We are definitely at work on it--plots for a campaign have been drawn up, rules are being designed, art is being planned--the whole deal! jmh